Kinetisense is now offering a hands-free voice command feature for all assessments. It is now easier than ever before to control the Kinetisense system from a distance. This will allow practitioners and trainers to be available to assist individuals if they require help during an assessment.

Important command words such as “Save”, “Discard”, “Skip”, “Start”, and “Stop” can be recognized by the system. As demonstrated in the video below, no buttons need to be manually selected in order to complete an entire workflow.

The voice command feature is especially helpful for modules such as Balance, Gait, Timed Up & Go, and 5x Sit To Stand. If spoken loudly and clearly, command words can be picked up by the system up to 15 feet away. Hands-free assessments will be available for both the desktop and iPad versions of Kinetisense. 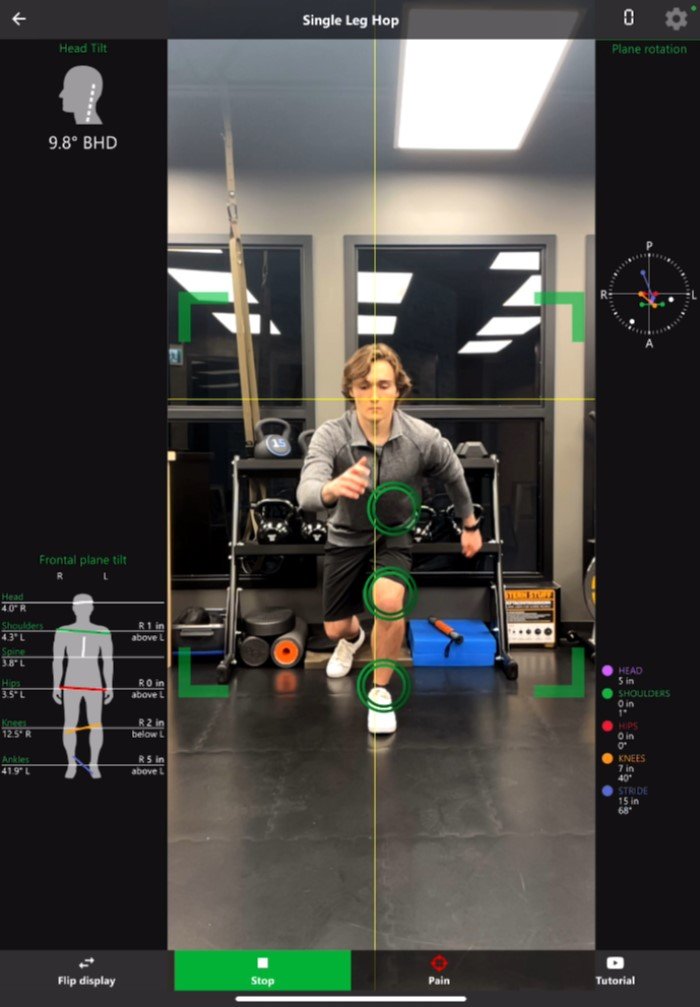 The single leg balance test assesses multiple aspects of the patient’s/client’s functional abilities. Approximately 85% of the normal gait cycle involves standing on one leg (1). This test challenges the motor control and balance of a patient, as well as their kinesthetic awareness. This is particularly relevant for the elderly population, as proprioception, balance, and coordination typically diminish with age.

Research has found that patients that report sacroiliac (SI) joint pain during a single leg stance have delayed firing of muscles on the symptomatic side, specifically the internal obliques, multifidi, and gluteus maximus (2). The biceps femoris on the other hand was found to be activated much sooner (2). EMG testing revealed that the muscle firing patterns on the symptomatic side differed significantly from the asymptomatic side. It was discovered that the delayed firing of the multifidi and internal obliques decreased their ability to serve as stabilizing muscles at the lumbopelvic region (2). It was also found that the early activation of the biceps femoris may be present due to a compensation for a delay in the firing of the gluteus maximus, which is responsible for extension at the hip and force closure of the SI joint via the sacrotuberous ligament and thoracolumbar fascia (2, 3). Other research has shown that poor balance may be associated with low back pain. One study in particular looked at excessive anterior and posterior sway during a single leg balance test and correlated this to the presence of low back pain (4). A similar study also noted that a deficit in balance abilities is correlated to an increased risk of developing low back pain (5)

From a performance standpoint, vestibular balance is a key assessment in regards to functional movement. Balance and its associated patterns of movement give insight into core, pelvic, and trunk stability, as well as strategies that are employed to establish or maintain a centrated center of mass (COM). The pelvis is the keystone for the entire body, with many of the myofascial slings passing through this area. Poor balance is often an indicator of the lack of stability and strength of the posterior chain, specifically the gluteus medius, gluteus maximus, hamstrings, gastrocs, and soleus muscles. The vestibular system also plays a key role in coordinating both basic and advanced movements. This system provides important information to the central nervous system regarding the spatial positioning of the body. The proper integration of vestibular and visual afferent input provides the foundational information that is required for the efferent activation of the core and non-core muscles. Performance in a sport often requires stability, mobility, explosive strength, coordination, and speed. The ability to efficiently process spatial information is required so that these other efferent processes can occur. Given its importance, the vestibular system should be trained through balance and proprioceptive training in order to optimize performance.

This update pertains to all customers that have upgraded from Version 5 to Version 6. Unfortunately, the updated assessments in Version 6 could not transfer into existing workflows from Version 5. Existing customized workflows that include neck flexion and neck extension have not been updated and require manual attention. To ensure that the most up-to-date assessments are included in your desired workflow, please create a new customized workflow that includes neck flexion side on and neck extension side on.

We apologize for any inconvenience. Please contact us if you have any questions regarding the new protocol or this workflow process.

This site uses cookies. By continuing to browse the site, you are agreeing to our use of cookies.

We may request cookies to be set on your device. We use cookies to let us know when you visit our websites, how you interact with us, to enrich your user experience, and to customize your relationship with our website.

Click on the different category headings to find out more. You can also change some of your preferences. Note that blocking some types of cookies may impact your experience on our websites and the services we are able to offer.

These cookies are strictly necessary to provide you with services available through our website and to use some of its features.

Because these cookies are strictly necessary to deliver the website, refusing them will have impact how our site functions. You always can block or delete cookies by changing your browser settings and force blocking all cookies on this website. But this will always prompt you to accept/refuse cookies when revisiting our site.

We fully respect if you want to refuse cookies but to avoid asking you again and again kindly allow us to store a cookie for that. You are free to opt out any time or opt in for other cookies to get a better experience. If you refuse cookies we will remove all set cookies in our domain.

We provide you with a list of stored cookies on your computer in our domain so you can check what we stored. Due to security reasons we are not able to show or modify cookies from other domains. You can check these in your browser security settings.

These cookies collect information that is used either in aggregate form to help us understand how our website is being used or how effective our marketing campaigns are, or to help us customize our website and application for you in order to enhance your experience.

If you do not want that we track your visit to our site you can disable tracking in your browser here:

We also use different external services like Google Webfonts, Google Maps, and external Video providers. Since these providers may collect personal data like your IP address we allow you to block them here. Please be aware that this might heavily reduce the functionality and appearance of our site. Changes will take effect once you reload the page.

The following cookies are also needed - You can choose if you want to allow them: